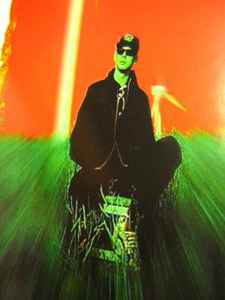 Real Name:
Marc Sebastian Royal
Profile:
This prolific artist has been producing breakbeat, jungle, and drum and bass since the early 90s. The "Mutant Jazz" single and the critically acclaimed album "Self Evident Truth Of An Intuitive Mind" (both released in 1995) are touted as staple Drum and Bass classics.

In 1998, T Power, along with Cris Stevens, formed "Chocolate Weasel" and released the single "Music for Body Lockers", followed by a funk and hip-hop album called "Spaghettification".

T Power also collaborated with Shy FX (Andre Williams), both as Ebony Dubsters and Shy FX and T Power. The duo's 2001 breakthrough track "Shake Ur Body" with vocalist Di reached Number 7 hit in the UK Singles Chart. Released on EMI subsidiary Positiva, it gained widespread support from both club and commercial radio DJs and helped to further popularize drum & bass as a mainstream music genre. The success of "Shake Ur Body" was followed by the duo's album "Set It Off", released in 2002 on Pete Tong's label F.F.R.R.. Several EPs and single releases followed; by 2005, Shy FX had made the decision to consolidate his releases onto his own label and founded Digital Soundboy Recordings. In collaboration with T Power, they subsequently released the album Diary of a Digital Sound Boy on 17 October 2005, featuring the songs "Feelings", "On The Run" and "Plastic Soul". Shy FX and T Power also released "Don't Wanna Know" featuring Di and MC Skibadee. The song was notably used on the UK television programme Soccer AM as part of the 'Skills Skool' feature.

In 2009, T Power reincarnated himself as Mr. Sofalumpkins, an electro/breakbeat/techno DJ, performing live Ableton sets, which consisted of a new sound and original new tracks.

In 2013, T Power collaborated with John Rolodex on the single, "That Jungle Vibe - Featuring Khadija", which was released on V Records.

T Power is just too much really... check the early releases for some really visionary developmental work in the breakbeat field which I think of as being a kind of Avant-Jungle. The tracks which appear on compilations are also incredible, like Tama on the Avantgardism 2CD and are really worth tracking down.