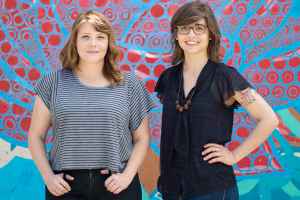 Profile:
The very name No Other carries a defiance and elusiveness, characteristics that are amply evident in the songs they write. The Philadelphia-based group doesn't shy away from either primal rock or propulsive pop but they don't follow straight lines; there is roiling mystery lurking within their instrumental interplay, yet this darkness is leavened by both their unapologetically direct attack and the inherent tunefulness of their songs. Their songs are spiky and intense but not alienating; at their core, they're pop songs but they're delivered with an energy that masks their precision. No Other makes vital, vibrant music that ignores trends in favor of building upon an independent rock legacy that stretches back past the initial punk explosion of the late '70s, creating a sound that is rich, complex and mature yet never complacent.

Maria T Sciarrino formed No Other, named for Gene Clark's 1974 cult classic LP—legendary as one of rock's expensive indulgent, alluring failures—in the wake of the dissolution of her previous band, Bedroom Problems. Once she had a clutch of songs ready, Maria reached out to Carly Marcoux and they began rehearsing in June of 2013. Not long afterward, Maria was introduced to Laura Chance, a native of Georgia who previously played in stoner metal bands, notably Helmsman.

The trio coalesced in July of 2013, and in September recorded their debut 3-song EP I Believe In Werner Herzog at Sex Dungeon Studios. The band continued to work on writing new material, and made their live debut in January 2014 at PhilaMOCA. The band returned to the studio in March 2014 to work with Jeff Ziegler at Uniform Recording (Kurt Vile, The War on Drugs, Nothing) on a 2-song 7-inch single for Negative Fun Records, to be released in September 2014.

Laura and Maria parted ways with Carly in Summer 2014, but continue to work on new No Other material for a full-length album to be released sometime in 2015.
Sites:
no-other.org
Members:
Carly Marcoux, Laura Chance, Maria Tessa Sciarrino