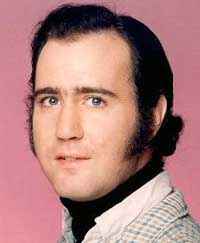 Real Name:
Andrew Geoffrey Kaufman
Profile:
American comedian known for his pretension - a characteristic so prevalent his loved ones suspected his own death to be a hoax. Acted in TV sitcom "Taxi"; subject of 1999 film "Man On The Moon." Among others Andy acted a double persona Tony Clifton, a sleazy Vegas lounge singer.