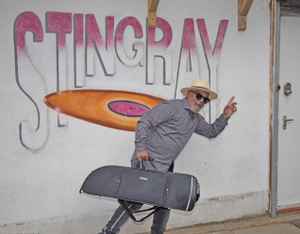 A trombonist, multi-instrumentalist, singer, composer and producer, Tenyue’s four-decade career tallies with some of Jamaica’s most celebrated foundation players. Born in Kent and raised in South East London, he learned brass instruments in church organisations as a very small child. Alongside his trumpeter brother Patrick, and later as a soloist, he became one of reggae’s most recognisable hornsmen at concerts, festivals and recording sessions around the world.

He has been hired by UK legends Matumbi, UB40, Aswad and the Dennis Bovell Dub band. He’s been a fixture of the touring bands of Jamaican superstars including Dennis Brown, Gregory Isaacs, Delroy Wilson and Horace Andy. And, of course, he co-founded, performed and recorded with his own Matic 16 and Matic Horns groups. Inspired by Don Drummond, Vin Gordon and Rico Rodriguez, he has enhanced the legacy of the trombone as an instrument of modern roots reggae and dub.