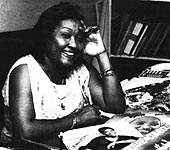 Sonia Pottinger,  was one of Jamaica's most noteworthy music producers during the 1960s and 70s. In a competitive realm dominated by men, she excelled through an individualised approach to record production that was bolstered by her keen business acumen, and leaves a back catalogue of outstanding quality.

The youngest of three children, she was born Sonia Durrant in Leith Hall, Jamaica, and moved to the capital, Kingston, at a young age to attend St George's girls school. She later pursued secretarial and accountancy courses, and married a chartered accountant, Lindon Pottinger, with whom she established a number of businesses in Kingston, including a bicycle store, and a shop selling her home-cooked patties.

Lindon began to produce records in 1961, recording local acts such as the Mellow Larks and Jimmy James. Founding the labels Gaydisc, Golden Arrow and SEP (his wife's initials), he opened a small recording studio at the family home. It was the first such facility in Jamaica to be owned and operated by a black person. There, he recorded artists including the Maytals, Derrick Harriott and Lord Tanamo. The material was sold at the Tip Top record shop and distribution centre, established by the Pottingers on Orange Street, then the centre of the Kingston music scene.

Although he continued to produce records into the rock-steady era, in 1964 Lindon sold his recording equipment to the better-established producer Duke Reid, who installed it in his newly constructed Treasure Isle facility. The following year, the Pottingers separated and, with three children to support, Sonia decided to venture into record production herself, launching the Gay Feet, Excel, Pep and High Note labels, and the Glory imprint for gospel titles.

A devout Christian, Sonia Pottinger used her instincts to guide her recording sessions, and scored an instant hit with the ballad Every Night, by the duo Joe White and Chuck, which remained in the Jamaican charts for several months.

During the rock-steady craze of 1966 and 67, Pottinger thrived, enjoying significant hits such as the Ethiopians' The Whip, Ken Boothe's Lady With the Starlight, the Gaylads' ABC Rocksteady and It's Hard to Confess, and the Melodians' sublime Swing and Dine and Little Nut Tree. When the new reggae style arrived shortly thereafter, she was at the forefront with the Hippy Boys' Dr No Go and Delano Stewart's That's Life. She also licensed recordings from rivals such as Bunny Lee, who allowed Slim Smith's Everybody Needs Love to be issued on High Note in 1969.

During the early 1970s, following the birth of her fourth child, Pottinger produced some of Judy Mowatt's earliest solo recordings and licensed Errol D.