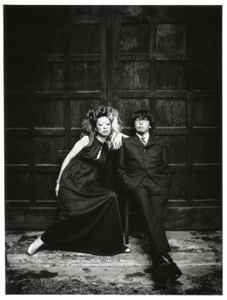 Profile:
Pizzicato Five (1985-2001) was a Japanese pop group best known to audiences in the West in their later incarnation as a duo of Maki Nomiya and Yasuharu Konishi.

Last members:
Yasuharu Konishi (1984–2001) - Songwriter, bass guitar, guitar, keyboards, vocals. Yasuharu Konishi (小西 康陽 Konishi Yasuharu?, born February 3, 1959 in Sapporo, Hokkaido) was the only founding member to stay with the group until the end. He is a music producer now.
Maki Nomiya (1990–2001) - Lead vocal. Maki Nomiya (野宮 真貴 Nomiya Maki?, born March 12, 1960 in Kushiro, Hokkaido) was the third vocalist of this group. She is also a solo singer, a narrator, a fashion model and a dress designer now.

May 13, 2022
I wish they would participate in RSD releases! The originals are too expensive!

Instant Replay should be in the compilation section as its a best-of album. "Sweet Smell Of Success 1993", "Groovy Summertime 1993", and "Readymade Sampler" should all be in the EP section as they are not full LPs, but are only samplers of their full length records.

June 27, 2018
It surprises me that there hasn't been a P5 reissue campaign since 2006, especially considering how much vinyl has risen in popularity in recent years. Not that any new Japanese pressings would be anywhere near affordable, but one can dream...
See 2 replies

September 12, 2015
Can we trace a parallel between Pizzicato Five and Saint Etienne ?
See 7 replies

Huge huge band which should deserve more popularity in Western countries. I don't know how big they are in Japan? Their music is... everything! A mix of cheesy japanese pop, rock, house, sixties french pop, trip-hop, jazz... They are very productive but i haven't listen a bad song from them. Listen to it and your life will be happier :)

March 30, 2004
This is my favorite Japanese group. It's really hard to classify their style of music, but lets just say that <B>Austin Powers</B> would be a very big fan of their sound. Yeah baby! YEAH!! They have a very groovy, pop like, electronic, downtempo, psychedelic, easylistening, bossa nova, jazzy sound to their music. It's totally hip. So yeah!! Even if you don't speak Japanese, pick their stuff up! It's way too <B>COOL</B>! (^_^ )