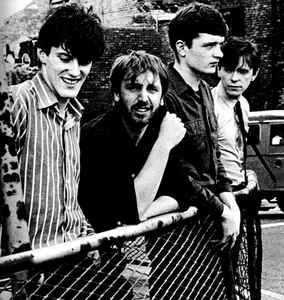 Profile:
Joy Division were a British punk/post-punk/new wave band formed in 1976 in Salford, Greater Manchester. They were incorrectly named Stiff Kittens (2) on the flyer for their first gig alongside Buzzcocks and Penetration but announced themselves as Warsaw (3) at the start of their first performance. Throughout 1977 they continued under this name up to the recording of the first EP but changed their name to Joy Division at the start of 1978, before releasing their first 7" EP "An Ideal For Living".

November 30, 2021
The most brilliant band out of England hands down! Ian Curtis' lyrics carried a confessional style that nevertheless felt universal and existential, striking at a despair that transcended race, gender, politics, etc. His deep, manic voice sang over Bernard Sumner's distorted, atmospheric and angular guitar while Peter Hook and Stephen Morris provided a doomy and propulsive drum and bass that was as danceable as it was dark. Truly affecting music. No other band comes close.

June 9, 2020
does anyone know what was the first copy of Unknown Pleasures on cd that contained the door photo that existed in the original LP press?

May 18, 2020
Hard to believe it's been 40 years since Ian's suicide - watched the documentary from 2007 today, then listened to both albums - what else but to say that they were absolutely one of the best bands of all time...…….

May 9, 2020
Interesting what wire100 writes about Ian Curtis below.

Having watched live performances of Joy Division on TV and the documentaries / movies showing Ian Curtis manically dancing - and considering his medication - you could plainly see Ian was in another world; certainly to the audience, but also to his band 'mates'.

Bearing this in mind it can be distressing to watch some of the performances. He is screaming his songs out, his eyes are wild, he is salivating, his movements are jolted, stiff and expressly PENT UP.

You sort of think: it is soooooo odd he is performing his ailments this way so publicly on stage and everybody else is dancing the night away (kind of unaware?) It's extraordinary - I thought: This guy clearly needs (better) help.

Ian Curtis' artistic legacy is undeniable, a true testament that through pain, great art can result, but the price is unthinkable. It's very sad.
See 1 reply

No other band came close,most influential band since '79!the last vagabonds in contemporary music.

January 4, 2019
Back in the late 70's/early 80's the term "new wave" was used in a general sense for any modern, non-mainstream rock that wasn't punk. In that sense JD was a new wave band, as were bands like Talking Heads, U2, and most of the acts that showed up in something like "Urgh: A Music War." As time went on, "new wave," like "alternative" and "indie" became such a broad term that it was almost meaningless. Put it this way: if you called something "new wave" in 80 or 81 most people knew what you were talking about. By 84 or 85 that was no longer the case.

And can we put a stake through the heart of the word "genre"? It's the most overused term in all of pop music; I absolutely hate when you recommend a band or artist to someone and their first question is "What genre is it?" The correct answer is "Who cares?" The only thing that the word is good for is to make internet searches easier. Otherwise, it's totally vacuous.

December 25, 2018
Love the admiration of the commenters here..... those negatives too,as that is the chemical for cult-ivation of a true iconic band that left the biggest imprint of music.forever grateful towards the band-itts !

August 28, 2018
One of the most influential bands of all time, Post-Punk never die!

I read all the reviews, and this seems much more a forum. I got something to say. When JD started they were absolutely a new wave band (they were part of the new musical scene emerged NOT after, but WITH the punk explosion). There's no one reason to consider JD out from this genre. I sayd genre and not style: new wave is full of different styles. What we call post punk saw JD as one of the "absolute beginners". But please don't forget Public Image Limited. I use to say Rotten invented punk and Lydon invented new wave (really enough for just one Johnny); perhaps this is not historically correct but i'm sure if the irish antichrist was dead after Metal Box we'd have tought at him as a genius, if not a saint (ah-ah!)
In Italy we called this music DARK, long before gothic or darkwave or post-punk or whatever. For some reasons i find it appropriated.
Time destroyes, death conserves. And so, back in 1981, Psychedelic Furs were considered from a lot of people the most interesting thing. It seems they (and Echo & the Bunnymen too) could build the bridge to put togheter the best sixties art music and dark (or post punk or new wave or..). Time destroyed PF reputation but at the meantime Unknown Pleasure and Closer got about 150 reissues while i'm writing. Sure Ian Curtis would has never believed it. JD knew the quality of their music, but in 1980 they had no one only reason to think they could be remembered in the future just a little bit more than a cult status band.
See 1 reply