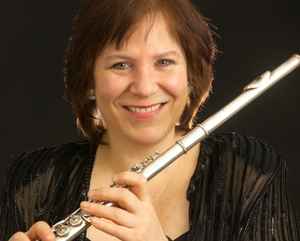 Profile:
Classical flautist.
She began her career as principal flute with the National Youth Orchestra of Great Britain, and gained a scholarship to London's Royal College of Music where she studied with Douglas Whittaker and William Bennett (3). She made her debut in the 1977 BBC Proms. She was then the flute player with Sir Peter Maxwell Davies's ensemble Fires of London (1977-85), Capricorn and The Albion Ensemble. She now performs mainly with The Nash Ensemble and London Winds, as well as her own group, Philippa & Friends (a flexible ensemble with a line-up ranging from a duo to six or more players) and the Davies Cole Duo, with Maggie Cole (harpsichord). Philippa is also a Professor at the Guildhall School of Music.
Sites:
jwnelleke.nl, gsmd.ac.uk
In Groups:
Capricorn (14), Fires Of London, London Winds, National Youth Orchestra Of Great Britain, The Albion Ensemble, The London Session Orchestra, The Nash Ensemble
Variations:
Viewing All | Philippa Davies
Philipa Davies, Philippa Davis, Phillipa Davies, Phillippa Davies, Pippa Davies, フリッパー・ディビス