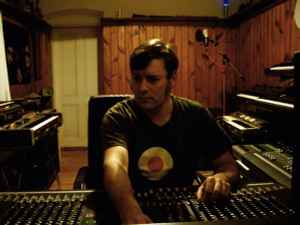 Profile:
Der Blutharsch was the main project of Austrian musician Albin Julius (1967-2022). Following in the footsteps of Autopsia and Laibach, Julius created a marching music of bombastic rhythms and folkish melodies, often infused with historical military speeches and orchestral samples. The earlier works tended towards a minimalistic sample-based instrumental style in an industrial/ambient vein, while more recent material has headed into a folk/acoustic sound, often accompanied with live vocals and instruments.

Der Blutharsch's first release was a self-titled picture LP released in late 1996 on the Arthur's Round Table label, but the project didn't became Julius' main musical outlet until 1998 after the break-up of his previous band The Moon Lay Hidden Beneath A Cloud. The first CD album "Der Sieg des Lichtes Ist des Lebens Heil" was released that year, followed by a series of limited EP's, before the release of the masterpiece "The Pleasures Received In Pain" in 1999.

Almost all of the bands releases are through Julius' personal Austrian-based label "WKN" ("Wir Kapitulieren Niemals"), which was distributed by World Serpent UK until 2000, when it switched to Tesco Distribution in Germany. Since 2001 various musicians have acted as part of the band, but Albin Julius claimed Der Blutharsch to have four permanent members: Marthynna, Jörg B. (of Graumadh), Bain Wolfkind (of Novo Homo) and himself.

Am i the hammer..or am i the nail..?
The phrase is writen on the dead wax of The Pleasures Received In Pain vinyl..Oftentimes one ponders that phrase considering his/her life..So where does that leave Albin?
Well this is for you to decide while exlporing his vast discography from T.M.L.H.B.A.C., till his most recent kraut manifestations..An untimely passing, that is always sad to see it happen to people you have linked parts of your life to, thru the medium of their art..It is thru that medium as well, that they still stay with us in time..And time maybe Thee Enemy, but time cannot conquer all that these people like Albin have given and presented to us as their heritage..Wether you liked his music, or you hated his music, one thing is for certain..That the impact he had on the "scene" was big, even so if you consider his collaborations with various artists and the breath of air he breathed in their works thru his.
So, with that in mind maybe after all he was neither a hammer nor a nail, but a cornerstone.
The Cornfileds Wave Toward The Sky, and so in the same manner we wave Albin goodbye, for now..Rest In Power.

It was posted on Facebook an hour ago that Albin Julius has passed.

January 19, 2021
A lot of people wasting a lot of breath disparaging Der Blutharsch for not being something that it was probably never supposed to be... Albin Julius knows his target audience, so either smoke em if you got em or shut up and leave.
Reply Notify me 3 Helpful

Albin's path is a classic Spenglerian example. It was all born with TMLHBAC, reached its climax with DB, and now dying with DBATICOTLH. The circle is closed. Consumatum est. Amen.

June 2, 2009
Der Blutharsch are the remains of inspiration of one great project "The moon lay hidden beneath the cloud", which was a witches tome of magick encompasing the occult side of europe together with ethnological time capsules of slavic and germanic tribes. In this new incarnation the author unwittingly lost identity in trade with aesthetics of right wing ideology. There is a couple of fine moments in ever growing discography, but its hard to fight against uninspired hyperproductivity for one without much time on hands. In the end the author himself confirms that "time is the enemy", which is taking irony to extreme levels.
Reply Notify me 6 Helpful

The problem with Der Blutharsch and many of their contemporaries isn't necessarily in all of its strange shadowplay mixing history with suspicious politics - it has more to do with the fact them being just one in a row of bands that without any such memorabilia wouldn't have existed in the so-called 'work of art'. Nazi imagery in that sense has been flirted with by so many before them, none of these examples are either better or worse in their controversy than Der Blutharsch arriving much too late to preach in such fashion. Denying aesthetic form in favour of rawness, their music is a hotch-potch of military this-and-that, occasionally effective and/or provocative but as a whole it is mainly a reprise of things many might take seriously wrong. Der Blutharsch themselves have certainly taken on Laibach's primary idiom of total art with occasional 'pop' pretensions, but the more you hear it, the more pompous it gets.

What is Der Blutharsch? what really represents?
Artistically speaking I notice a Romantic longing for a certain period of the past, rejection towards modernity and a political stand now clichéd and anachronic.

Their ideals as a whole may be outdated yet they are interesting precisely because of that. There’s a necessity for nostalgia and a longing for what is lost in Europe, in the world, for our past, and the tragedy behind what is left behind whether it was tragic or magnificent. Things that will never return, That’s the triumph of Der Blutharsch and many of his cloned disciples and contemporaries. They captured a feeling and transformed it into art. Then comes the form. Its syncretism and proudness, its well crafted musical structures that could be the soundtrack for a Riefenstahl film are great on their own. That’s what counts for music. That’s what ultimately counts for art.

Der Blutharsch is great precisely because it had the balls to disrupt the order, to confront the artistic world and the public, yet their music has an almost childlike simplicity, it is almost a tantrum for a lost toy. Marches and more marches, speeches, more marches, entire songs sampled from old recordings no one remember now and melancholic ambient pieces, at some point some European folkloric references.

Aside from the musical aspect, Der blutharsch is just another of the countless number of bands that want to fall into the category of political interpretation and identifiable character, lets call it right wing or fascism (which is no difference these days) people that want to chase a battle for their beliefs and opinions through art. That’s a lot better than bombing the hell out of a country with the backing that comes from a submissive society totally numbed by their political correctness, their oh-so “moral” mentality and the necessity to preserve their comfort at all costs.
As long as the artist remain in the very core of art creation and vision, he will preserve his stability and above all, his credibility. That’s something that Laibach (working in similar political quest) acquired yet at some point of their career they had to clarify their ideological position in order to be “accepted” by the statu quo, something that Der Blutharsch has never done and probably never will.
Der Blutharsch chased a fight for the right to say something through art yet they lost it in two fronts, the personal one (the man behind the project) and artistically. First because Albin Julius ended like a lost soul, a pariah (even thought he should have known that the war he declared with his art should have a tremendous cost for his persona) an alcoholic who now easily retracts from his artistic advancements and entered the more common and comfortable grounds of pop music instead of the irregular and dangerous underground territory he was walking before. Secondly the evident retraction and virulence of their artistic creation was suppressed/censored or declared as banal by the artist himself, that way losing ALL credibility and solid stand of his previous declaration. Their favourite time phrase “wir kapitulieren niemals” is just a bluff now.
On the other hand no real anti-modernist/13-year-old-like-attitude wannabe fascist could have such eagerness for money and capitalistic endeavours such as Mr Albin Julius has demonstrated.
Julius is great for one thing, and that is not his "ideology" whatever that may be (nobody can be sure about that, after all his works are a fuzzy fascism that venerates Julius Evola and D’annunzio) but for his creations, his music. Loathing? Great? That’s the listener choice, if you don’t like the content… Then don’t buy it.

Music has the right to be politic, music proposed as a declaration for the non lineal political social dogma or away from the standard of the political correctness as well.
Above all, this is music, therefore art, and art has no limits even if the reaching of their choosen political premise (the content) in itself contradicts the parameter of the unlimited character of the art and the music in general as it’s stated. That’s why art is great. It’s strongly polemic and has to be free to create admiration or loathing. Restrictions or censoring towards art can only lead to a “good” or “acceptable” art which is not far away from the precedent of the Enterte Kunst displayed by National Socialism as a premise for artistic creation. Another limit. In our now limited and dried land of opportunities and progress named after “civilization”.