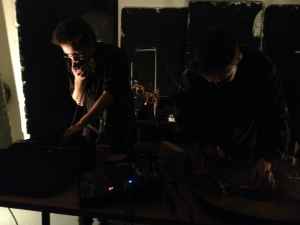 Real Name:
James Shearman & Charlie Wheatley
Profile:
The duo known as Prolonged Version have been making and performing sonic explorations from late 2013. Originally, the two came together to record material for Shearman's projects "Echoes ... Leytonstone" and "Camera Fiend" on Wheatley's Akai reel-to-reel tape recording device. The two ended up recording collaborative material as well and the duo was borne out of this coming together. In the "early demo" situated on bandcamp, the two typically blend the two sounds from Shearman's "Echoes ... Leytonstone" project of ambient guitar drones and Wheatley's solo project "Ti Seed" (as well as variation, "Nodal Incline") of synthetic organ compositions and improvisation.

Within the space between January and March 2014 the two had drastically altered their sound - Shearman's solo noise project "A Raja's Mesh Men" brought down to bear on the sound, and Wheatley's solo musique concrete experiments as "Phonic Rotations" did as well - as the two switched influences for much noisier and industrial sources this was reflected in their full-length, "All Watched Over By Machines With Neurotic Disorders" - which was picked up for release to CDr by the Leeds-based poetry zine and sub-label "The Junkyard Procession" due to it's subtle incorporation of spoken word elements from Shearman (something that had remained from the sonic environment of the early demo).

The two have since continued to record and perform and are currently working on their next release which will be a self-released double-cassette album consisting of a C20 and a C30 in a dual-case. Their live performing in 2014 has extended the trend of drastically altering the sound palette for the two collaborators, and often sequentially involves the two performing on entirely new set-ups that can be impromptu on the night or slightly practised yet still improvised within.
Sites:
Bandcamp, Last.fm, Facebook
Members:
James Shearman (2)