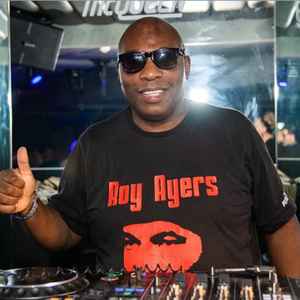 Profile:
Dez Parkes (died 11th November 2022) compiler, collector, producer, DJ is one of the UKs most knowledgeable sources of music information.
Some people say he was a walking encyclopedia on music. For 30 years Dez had monitored the changing face of entertainment as a dancer, deejay and label owner. Dez's passion for music began as a young child growing up in a collectors environment: his father was a record collector covering all aspects of black music and Dez himself ventured into this intriguing world in his early teens.
In the early 70s he started dancing in the underground clubs with groups and became something of a fixture at the infamous Crackers, Birds Nest and the Whisky A Go Go (today known as The Wag), to name but a few, where under the tag Unknown Kwantity he became responsible for getting the party going.
Dez's first DJ spot was to cover for the resident Sonny at the Whisky. Then came a liaison with another vinyl spinner, Trevor Shakes, and Dez and Trevor eventually teamed up to kick off the underground club, Spats. Running for some three years the club built an enviable reputation and anybody who was anybody and many of today's significant names attended to soak up the music and atmosphere.
Further stints at Browns and The Maze (a.k.a Upstairs at Ronnies (Scotts)) kept his reputation flying high. In 1987 Dez was approached by RCA to compile and launch the Rare series of albums, which were responsible for starting the whole rare groove revival. The first release went straight into the national album charts at no. 75 - (this was a real ground breaker for underground rare black music in this country). Four further volumes were released plus a Best Of. The series was also responsible for containing numerous breaks, beats, samples and loops.
On the back of this series he then compiled Motown Rare Grooves and Prelude One, again for RCA. At the same time Dez was working on some of the London's pirate radio stations including WBLS, Dance FM and Laser. During this very busy period Dez and several associates launched TUF (The Underground Family) Records and kicked off with a cover of Sweet Charles Yes Its You by Diana Brown & The Brothers which proved to be a major underground club hit: the group went on to become The Brand New Heavies.
TUF Records following projects by Zinc and Rodeo Jones were received reasonably well, but following a hip-hop excursion from East Side Connection (which also rocked the label) the company was, alas, wound up.
Dez's next liaison was with Ace Records where he compiled The Best of Pleasure Vols I and II. Further compilations for Ace followed namely All Spice, Jazz Collective and The Best of Pucho and the Latin Soul Brothers. Dez was later approached by Mastercuts and was asked to compile a couple of albums for them. What followed were Classic Rare Groove Vol.1 and Classic Rare Groove Vol.2.
Dez continued to work in various areas of the music industry and continued to do so. He held approximately 50,000 records in his collection.
Sites:
snbc13.com, Twitter, MySpace
In Groups:
T.U.F. Enterprises
Variations:
Viewing All | Dez Parkes
D. Parkes, Des Parkes