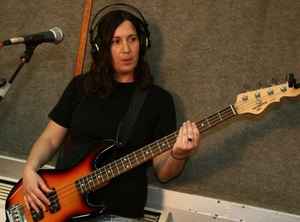 Profile:
Israeli bass guitarist, best known as one of the original members of HaMechashefot (The Witches) in the 1990s. The band never officially disbanded but with the death of lead singer and guitarist Inbal Perlmuter the surviving members stopped working together. Netz began performing again as a solo artist in 2007. A revived version of the band called The Witchez (still HaMechashefot in Hebrew) was formed in 2012 and is working a new album produced by Corinne Allal, who also produced the first album by the original band.
Sites:
Wikipedia
In Groups:
The Witches (3)
Variations:
Viewing All | Yifat Netz
יפעת נץ