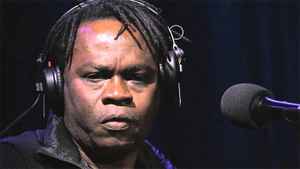 Profile:
(* 12 November 1953 in Podor) is a Senegalese singer, guitarist and percussionist. Under the influence of his friend and family griot Mansour Seck he devoted himself to learning music from his mother and his school's headmaster and then went on to study music at the university in Dakar and postgraduate on a scholarship at Beaux-Arts in Paris. Baaba sings primarily in Pulaar and is the foremost promoter of the traditions of the Pulaar-speaking peoples who live on both sides of the Senegal River.
Sites:
Facebook, instagram.com, Twitter, Wikipedia, YouTube, endolab.jp
In Groups:
"46664 The Event" Cast, Africa Express
Variations:
Viewing All | Baaba Maal
B Maal, B. Maal, B.Maal, Baaba Maala, Baaba Mal, Baba Maal, Baba Mall, Babba Maal, Beenie Man, El-Hadj Baaba Maal, Maal, Rebel Maal