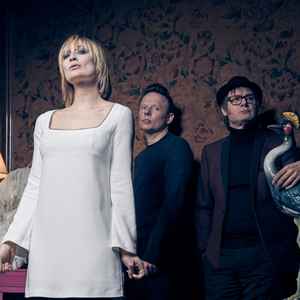 Profile:
The Belgian band Hooverphonic formed in 1995 by original members Alex Callier, Frank Duchêne, and Raymond Geerts. The three first met up and formed a band called The Love Letter Boxes in 1994. The format of music they played can best be described as "60's-inspired naive pop".

Alex and Frank had been attending the Rits Film School in Brussels.. Alex knew Raymond, who had been playing in a local band from Sint-Niklaas, and asked him if he would be interested in joining the band. Along with two other mutual friends who played bass and drums, the guys wrote songs with Alex singing vocals and playing guitar, Frank playing keyboards, and Raymond playing guitars as well. They made a demo tape and sent it to a record company. The demo tape was rejected and the bass player and drummer left the line-up.

Alex had already acquired a drum machine and along with a sampler he bought which allowed the three to work quicker and more efficiently. It also allowed them to develop their new musical direction.

They began recording these tracks with Esther as the lead vocalist in a firehouse in Sint-Niklaas. The track that made Hooverphonic realize its niche was "Inhaler". The song gave birth to the inspiration to record the other tracks that later made their way onto their first album A New Stereophonic Sound Spectacular.

Frank played the demo tape for Luc Van Acker (Lords of Acid, Revolting Cocks, Shreikback, Ministry) who was the studio manager at Galaxy Studios at that time. Van Acker was quite impressed by it and recommended that the band send the demo tape to international record labels.

At first the reaction from the record labels was rather skeptical. But the break in the skepticism came by an enthusiastic response from an A & R person at Sony UK. Suddenly the band found messages on their answering machines from such labels as 4AD, Sony Belgium, EMI, and Play It Again Sam. The band decided to sign with Sony Belgium.

The band first set out to re-record "2Wicky" with Liesje's vocals for Stealing Beauty and that demo version was the one that was used in the movie and subsequently on the soundtrack.
Hooverphonic began recording their first album in their home studio and in Galaxy Studios. British producer/mixer Roland Harrington (Soul II Soul, Björk, Simply Red, Catatonia) mixed A New Stereophonic Sound Spectacular at Whitfield Studios in London. The album was released in Europe on July 29, 1996 and had its U.S. release on April 15, 1997.

The first single was "Wardrope" and the release of "2wicky" was a radio hit in several countries. The band instantly gained notoriety as an underground buzz band. Hooverphoinc started touring shortly thereafter. Also around this same time the band had to change their name from Hoover to Hooverphonic because there was already a German and an American band by the same moniker.

Hooverphonic's Alex Callier had been asked to write the score and soundtrack to the Belgian film Shades starring Mickey Rourke. Due to a release conflict with "Lung", Hooverphonic recorded the title track under the alias Milk Fisk.

January 25, 2020
Stunning Pressing. Probably the most quiet record in my collection. There are maybe 3-4 clicks per side out of the box. Enornous dynamics, spectacular stereo image (from a live theatre recording), huge levels of detail and clarity against an inky black background. A record to show off your system...