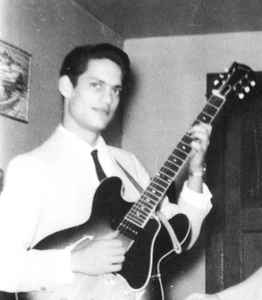 Real Name:
Brian Winston Russell
Profile:
Guitarist and singer, born in Calcutta, India, he lived for a time in England, moved with his family to the Okanogan Valley of central British Columbia, Canada, during the 1960s, and eventually on to Vancouver.
He is the brother of Gillian Russell (3).
Brian was an early member of the The Classics (9).
In 1966, he formed Three To One with singer and guitarist John Renton, bassist Derek Norris and drummer Claudette Skrypnyk (aka Claudette Scritnik, but I think this is the correct spelling), formerly of The Shadracks (2), all of whom he met working as a studio musician around Vancouver.
The Three (the boys) To One (Claudette) moved to Toronto, Ontario, playing their first gig there in the suburb of Scarborough with Roy Kenner & The Associates, anđ The Mission featuring Eddie Spencer, eventually recording one 45 for Arc Records (4) the same year.
About a year later, Three To One changed their name to the more current The Raja, keeping the same lineup.
In spite of playing many local gigs and a big show in Montreal with Mandala (11), as well as cutting a fine single on Arc affiliate Goodgroove, The Raja did not meet with much success.
By 1969, Brian had become a house musician and arranger for Arc Sound Ltd., doing a lot of the heavy lifting - including designing the cover - for The Subtle Art Of Self Destruction by Heads Of Our Time, a studio aggregation which included many musicians from The Majestics.
He went on to do a lot of studio work around Toronto in the seventies, including playing on sessions for Anne Murray and Roger Whittaker and on the Tommy Hunter (2) Show on CBC television.
A few years later, after Brian had moved back to the West Coast, Whittaker was looking for a guitarist for his touring band, and Brian's name came up as a suggestion.
He ended up spending over a decade backing Whittaker and can be seen in several live videos of the show on youtube, including a solo instrumental showcase titled "Russelling Along."
Brian is a phenomenally talented, yet grossly underrated guitar player.
In recent years, he has been playing around Penticton, sometimes with his sister Gillian.
In Groups:
The Classics (9), The Raja, Three To One
Variations:
Viewing All | Brian Russell
B. Russel, B. Russell, Brian, Brian Russel, Russell