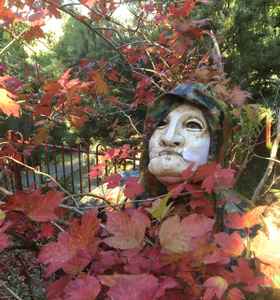 Douglas P. is the solo member of Death In June since 1985.

Their music started in the postpunk area and later evolved towards a mixture of acoustic ballads and synth-wave music. Death In June are often credited as the forefathers of the so called "apocalyptic folk" or "neofolk" genre.

DIJ, the Dark-Goth-Industrial (European) neoFolk fathers. Douglas Pearce is a veteran Brit musician and great composer and your work with/in your project, DIJ speaks for him. I think that his political ideology, nazbol or European nationalist, or his sexual condition, homosexual, should not influence the reception of his music at all. Douglas has never hidden or tried to disguise his musical, ideological and artistic proposal. Either take it or leave it.

May 30, 2016
This is what, Douglas Pierce, can do,Like, he play in 2 side,like Crijevo wrote: celebrating romanticism and the apocalypse on equal terms, the result is a wonderfull music, He is a real genyus. his music is a masterpiece. It is not very famous, and labels do not want it, because writing things on Nazism. censorship does not allow to put his songs on the radio,so only a few person know him and his few but good. as He said to his casemusic, but maybe this is good, for him and his song, better was , probably the world isn't ready for him

One of Neofolk's most prominent exponents, celebrating romanticism and the apocalypse on equal terms, Death in June produced some of the most confrontational and uncompromising music, mixing symbolic menace with sexual, political and the occult leaving little choice to classic listeners that usually find this kind of music repulsive, offensive or at its easiest - thought provoking.

From their early Joy Division-flavoured post-punk statements veering towards military fashions, often explicitely delivered by Douglas P. as the project's only constant (evocative for his unusual masked appearance), DIJ tried it out in both, electronic dance and acoustic ballads that dominated their mid-80s period highlighted with albums like 'Nada' and especially 'The World That Summer', considered by many as the group's finest work. Several dozen of albums later however, Death In June tend proving their artistic strengths, although drowning themselves in endless (read: tiresome) apocalypse preaching of 'Europe', pulling inspiration from one too many controversial subjects, among which openly flirting with fascist and nazi imagery, gained them much condemnation from the public.