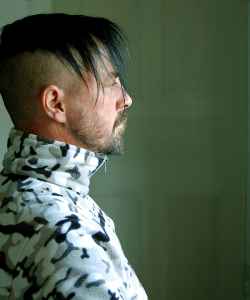 Enfantterrible did a great job on his review, so, I'm just going to add some outside perspective...

Well, maybe not too far outside... I spent three decades collecting specifically noisy/dark music before coming out of the noise hole. I now listen to a much broader range of music (still electronic/experimental) than I did a decade ago...

This is exactly why I felt I had to comment...

There are a lot of aspects of DN's music that would be of interest to those outside the goth/industrial scene. Minimal, tribal and ambient genres merely top that list. Not only does he/she work faithfully within the confines of those genres and still sound "dark", all of the music is highly mixable and very sublime.

Its also worth noting that a lot of the earlier works are not so dark when taken out of context (I.e. used in a non-industrial set). Try mixing it low in a dnb, or dubstep set and listen to the drops...


The music is dark sure, but its also so beautiful, it really does deserve a wider audience.

The verge that separate insanity and genius is almost inexistent, although not any vulgar madman could be called a genius, is very frequent to find legitimate geniuses absolutely fallen into madness, or at least, rebelled against the order absolute imposed as rule of behaviour or as logic command for artistic creation, therefore labelled madmen as a symptom of common incomprehension and prejudice.
Peter Andersson the man or Lina baby doll the alter-ego that sustain the heavy structure that compromise Deutsch Nepal is one of those characters, the kind that is really needed more often in the scene of industrialism, avant-garde, music and art in general as his sonic attacks are able to bring originality from the very core of chaos and the results are actually able to seduce the listener.
Deutsch Nepal is capable to re-create/re-design old school industrial and electronica, taking elements from apparently dissimilar concepts such as Dadaism and Tribalism, or “contradictory” ideas such as heathenism and christianism and converge them into a typical cocktail blend that characterizes a unique now famous style.
Manic rhythmic redundancies, strange indefinable samplers, metallic sounds, distorted guitar chords are common elements found in all his works, his main goal? To mesmerize the listener, to subjugate the mind and to put the spirit into reverberation mode.
It is difficult to reduce all his works to a simple description or review, All of them seem to be the evolution of an early idea, a baby that grows old, getting monstrous and divine while doing so. The music itself is a never ending universal paradox in where beats and rhythm has special method and most important strategy, Deutsch Nepal is surreal landscapes strongly conducted and cut through with the violent/precise pounding of the repetitive aspect of percussion. It’s a black and white obsession, changing shapes and tonality. Beyond that subjective approach there’s probably nothing more than the subconscious world of Lina, or is it Peter? Who cares. We need to give him the chance to bury his secret inside the tomb of his soul.
Resuming, all that can be said is that this is music that requires time and disposition to get into, darkness and bizarre never were so tasty!
Salut!