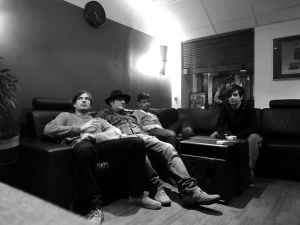 Profile:
Italian avantgarde band based in Rome. Their music melts acid jazz, noise, electronics, experimental sounds and improvisation.
They formed in the early 1980s and released various cassette demos via their own label Atropina Manufactory. The debut on vinyl came in 1991 with "Dicer's Oath". Mushroom's Patience continued to exist in the underground and to release very limited and hard to find material, until they signed for Austrian label Hau Ruck!, which reissued many of their deleted records on vinyl, as well as brand-new works on CD.
Raffaele Cerroni (aka Dither Craf, aka Domus Craf) is the mastermind, leader and solo member of Mushroom's Patience. Many different people were part of the band during the years, for example Jürgen Weber and Frl. Tost (Novy Svet), ClauDEDI (Ain Soph) Vinz aquarian (Ballo delle castagne).
Since 2010, Mushroom's Patience are signed to Klanggalerie who will continue to release music by this outstanding project.
In November 2015 the band annunced in their official website to have stopped the Live Shows and in the 2016 will see released the last album.