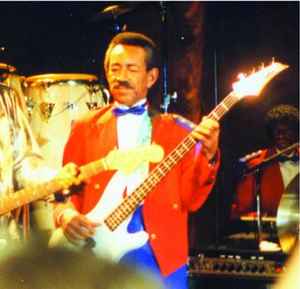 Profile:
American bassist, born 1931, died 17 August 2004.
When James Brown gained enough succes (and money) to hire a regular band at the end of 1958, Bernard Odum, that was already in the musical business, became bassist of his group.
Even if he was sometimes replaced by Hubert Perry, 'Sweet' Charles Sherrell or others, Bernard worked in the James Brown band until the end of the 60's and was fired (with all other musicians) when James decided to create a new young group, The J.B.'s, in the end of 1969.
Bernard then briefly joined Maceo Parker in All the King's Men group in 1970.
In Groups:
James Brown and His Orchestra, Maceo & All The King's Men, The James Brown Band
Variations:
Viewing All | Bernard Odum
B. Odom, B. Odum, Bernard Odom, Bernard Sodum, Odam, Odom, Odum