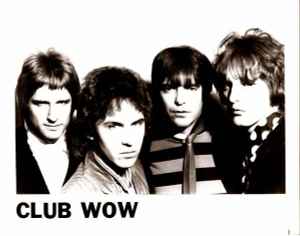 Profile:
An american power pop band from Cleveland, OH, was active 1982-1985 but released only one 7" single.
The line-up on the single was Billy Sullivan, Frank Secich, Jeff West and Jimmy Zero.
According to Frank Secich, the band recorded many other songs which remained unreleased until Jan. 2016, when Australian label Zero Hour Records (3) released a collection:
Nowhere Fast - A Retrospective 1982 - 1985 CD/DVD.

Latest news from late 2014:
Zero Hour Records (3) is planning an album release in 2015.
That'll include one and only self released single and the album they recorded that never was.
They are also looking at film footage and a DVD may be included with this release making it an even more awesome release to own.

The above is copied from Frank Secich interview January 23, 2010:
http://whitetrashsoul.blogspot.fi/2010/01/interview-frank-secich-blue-ash-stiv.html

Q: ...you formed a band with other Dead Boy, Jimmy Zero. It was Club Wow. What is the story behind that band?
A: Jimmy Zero asked me to join his new group called Club Wow in January of 1982. Club
Wow was a fine band . The members were Billy Sullivan on lead guitar, Jeff West on
drums, Jimmy Zero on rhythm and me on bass. We were together for three years 1982-85
and we made many recordings. There is a my space site for Club Wow. We tried hard for
a few years to get a major label deal. We got close but it never happened. I hope
someone will release those songs someday. There are some good tunes there.

"After the Dead Boys died, out of pure inertia and fear of the real world and working a real job, I continued on in music," Zero says over lunch at It's It Café, an eatery that's walking distance from his Lakewood home. "I was doing it for all the wrong reasons, and I was miserable. The music reflected it. I didn't have anything to say with Club Wow. They were great musicians -- I have nothing against them -- it was me. I was after fame and fortune, and music took a backseat. I finally got so tired of myself that I thought, if I shut up, people will respect that rather than having me polluting the airwaves. Naturally, no one noticed that I went away. But I did."
Sites:
MySpace, Facebook, zerohourrecords.bigcartel.com
Members:
Billy Sullivan, Frank Secich, Jeff West (4), William James Wilden