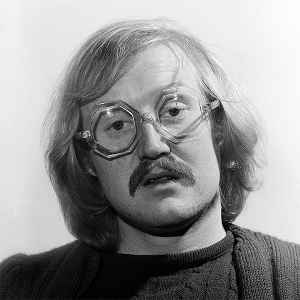 Real Name:
Victor Anthony Stanshall
Profile:
Vivian Stanshall (born 21 March 1943, Shillingford, Oxfordshire, England – died 5 March 1995, London, England) was an English singer-songwriter, musician, author, poet and wit. First rising to fame as an integral member of the Bonzo Dog Doo-Dah Band in the late 1960's, Stanshall embarked on an idiosyncratic solo career when the Bonzos split up in 1970, astonishing in its variety and fertility but also broken up by long periods of inactivity as a consequence of his problems with alcoholism and depression.

Perhaps his most famous creation was the saga of Rawlinson End, sprawling spoken-word pieces interspersed with original songs. The stories began with a relatively short track on the final Bonzo Dog Band album ‘Let’s Make Up and Be Friendly’ but grew into 20-minute pieces on the John Peel Show on BBC Radio 1, and resultant albums, from 1975 onwards. Depicting a world of English aristocracy that was part P.G. Wodehouse, part Mervyn Peake, they were a showcase for Stanshall’s intricate wordplay and surreal imagination, along with his mellifluous and elastic voice.

Although Stanshall could be notoriously erratic and difficult to work with, he was involved in a number of collaborations with such artists as Robert Calvert, Eric Clapton, Keith Moon and Steve Winwood, and also created two solo albums notable for their varied musical styles and lyrics full of his perennial loves of rhyming slang, absurdist puns and tongue-twisters.

After a period of creative resurgence in the late 1980's that saw a number of Rawlinson End sessions for John Peel and a West End staging of his musical play "Stinkfoot" (partly financed by Stephen Fry and Peter Gabriel), Stanshall’s drinking worsened in the 1990's and he perished in a fire at his flat in London on 5 March 1995, probably caused by an overturned lamp as he slept.