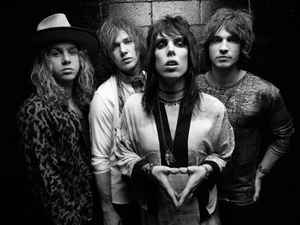 The band's influences include Queen, The Darkness, the Rolling Stones, Aerosmith, Def Leppard, The Killers, The Smiths, Oasis, The Libertines, The Strokes, and My Chemical Romance. The Struts have been described as "unabashedly over the top retro-fetishist classic rock" and "glamorous and dangerous".

March 2, 2018
Love Man on the Rocks and sailing by Mile Oldfield with Luke on lead vocals so I thought I would explore The Struts a bit more and do you know what? They are very, very good. The best Rock / poprock I have heard in a very long time and the comparisons in quality between these guys and groups like Queen are not misplaced. I hope the follow up a) happens and b) is as good because if it is then they should have a trajectory to the very top. Keep at it lads, you are talented in the extreme. Fave song is Put your money on me, it's a belter.

February 2, 2016
LOVE THE STRUTS!!! THE STRUTS RESUCITATION OF REAL, HONEST, ROCK & ROLL, BABY!!!! "PUT YOUR MONEY ON LUKE SPILLER & THE STRUTS"!! ANYONE FORTUNATE ENOUGH TO SEE A LIVE SHOW SHOULD BE WITNESSING HISTORY IN THE MAKING...LUKE SPILLER LOOKS LIKE HE'S BEEN GETTING THE MOVES DOWN SINCE HE'S AROUND 3 YEARS OLD!! THEY TOURED U.S. IN 2015 PROMOTING "EVERYBODY WANTS", BUT I DON'T THINK RELEASES HERE UNTIL MARCH '16 (DON'T KNOW WHY?!) HOWEVER, IT COULD BE PURCHASED HERE @ DISCOGS!I GOT IT, "'EVERYBODY WANTS" BEFORE CHRISTMAS FOR MYSELF & SOME FRIENDS!! "ROLL UP" FREDDIE MERCURY, MICK JAGGER, MARC BOLAN (T. REX), SLADE & SWEET WITH SOME EXCELLENT FRESH, NEW SONGWRITING (LUKE SPILLER ISN'T ONLY AN AMAZING SINGER & FRONTMAN) SHOULD BE RECIPE FOR YEARS OF SUCCESS FOR THE STRUTS!!! SURE HOPE SO! IF YOU'RE A FAN OF ROCK 'N ROLL, DON'T ONLY "KISS THIS"...BUY THIS!!!!
See 2 replies