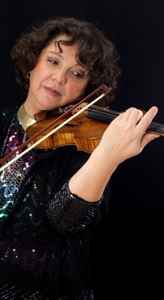 Profile:
Romanian-born (1960) violinist debuted in the early 70's under the performing name of Liliana Ciulei - she later started using her real name Lenuța Ciulei.
She studied at the Bucharest Conservatory and was a 1976 winner of the International Paganini Violin Competition at 16 years.
She began learning the violin from a young age and gave her public debut performance when she was eleven years old.
When she was 16 she gave a performance of Paganini’s Concerto No. 1 in D major with the World Youth Symphony in Michigan.
After graduating in Bucharest in 1981 she moved to the United States and studied with Ruggiero Ricci.
In US became a member of the Concerto Soloists Chamber Orchestra of Philadelphia.
Was married with romanian cellist George Atanasiu
Currently a member of the violin faculty at both Rutgers and Rowan Universities in New Jersey, in addition to giving masterclasses throughout Europe and the United States.
Sites:
lenutaciulei.weebly.com, tomozei.free.fr, users.erols.com, masongross.rutgers.edu
In Groups:
Concerto Soloists Chamber Orchestra Of Philadelphia
Variations:
Viewing All | Lenuța Ciulei
Lenuța Ciulei Atanasiu, Lenuța Ciulei-Atanasiu, Liliana Ciulei