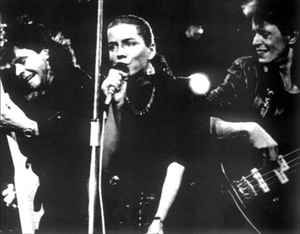 Profile:
80's rock band from Rondebosch, Cape Town that recorded their first promo, "Partners in Crime" around 1982. Released on cassette with vocalist Ayala Katz, it was recorded in a garage, featuring various backing vocalists and sax players. After just a few live performances, Ayala decided to leave the band to pursue a career in jazz.

It was when the drummer's brother's girlfriend's classmate at the teacher's training college was hired in 1983 that the band really took off. One more promo cassette, "Catch That Sweaty Feeling", was released in 1984 and now with Wendy Oldfield as vocalist, the band's edgy rock sound garnered them a solid following and fan base.
The "No Sweat" album (produced by Kevin Shirley) was released in 1986, with three singles lifted off it. One more album (untitled) was recorded in late 1988. It was shelved for the time being and Wendy Oldfield left to go solo in November of that year.

Wendy was replaced by vocalists Michelle Bestbier and Kelly Hunter, and despite heavy gigging the band had lost its magical touch. Michelle Bestbier was later replaced by Tanya Malherbe, although the band did play a few gigs thereafter (with Wendy Oldfield resuming vocal duties) before John Mair died 11 November 2002.