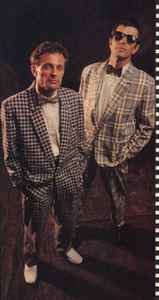 Profile:
Formed in Cape Town in 1978 by two cousins, guitarist Allan Faull (born 30 January 1949) and vocalist Nielen Mirror (born Nielen Marais 11 June 1951), Falling Mirror remain one of South Africa's greatest and most eclectic alternative bands... ever!
In 1978, both were residents of the Valkenberg Mental Institution.

Then A&R man for WEA, Benjy Mudie describes them as "special". "To me the Mirror were, like the Asylum Kids, pioneers... trailblazers in a country at war with itself, they were, I suppose, our Pink Floyd complete with a Syd Barrett genius type and a guitarist that, in any other country would have been up there with Knopfler, Clapton, Beck, etc." in 1999.
Sites:
fallingmirror.com
Members:
Allan Faull