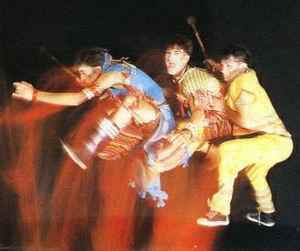 Originally formed in 1977 around core members and brothers Lucien and Erik Windrich and then known simply as Void, the group won their section of the "East Rand Battle Of The Bands" in 1978. Adopting the name éVoid in 1982, the band would (complete with painted faces, tribal dances and jive rhythms - known as 'ethnotronics') rise in prominence and receive increasing attention, thanks to their live performances and guerilla-style self-promotion as they moved from one rock venue to the next across the country. éVoid's most famous residency was surely that at the Chelsea Hotel in Hillbrow, Johannesburg, with dedicated fans (known as fadgets) in almost equally outrageous and colourful ethno-gypsy garb queueing for hundreds of metres.

Early in 1983, drummer George Voros left for England. Wayne Harker was hired and work on their eponymous debut album began in April of that year.

1985 saw éVoid play in front of some 100,000 music fans at "The Concert in the Park" in support of Operation Hunger at Johannesburg's Ellis Park Stadium. However, by then the band also felt that they had reached the pinnacle of their hopes in South Africa and the brothers left for the UK.

Work on the duo's second album "Here Comes the Rot" was undertaken throughout most of 1986 and the album was released in December 1986 to coincide with éVoid's return to SA for a six-week nationwide tour - to mixed views and sentiments. The duo released a third, "Graffiti Lounge", in 2008.

Artists I wanna check out by Plasnes
View More Lists →