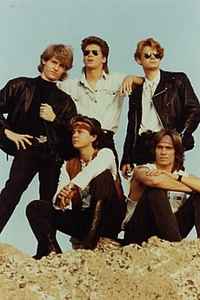 Profile:
Durban-based band that had the ingredients for major success with lead singer Kevin van Staden, a front man with a great rock voice, matinee idol looks, and an eight-album plan ahead.
Despite topping the South African charts and touring incessantly, the band didn't really make the great leap to the next International level and disintegrated in the early '90s after releasing two albums.

Sadly, whilst working on his debut solo album, Kevin was tragically killed in a car accident on 26th December 1994.