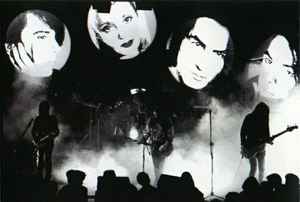 No Friends Of Harry

Profile:
Formed in Johannesburg in 1986, N.F.O.H. rightly claim the title of South Africa's first and most influential alternative/goth band, thanks to heavy rotation (primarily on Barney Simon's Shadow Show on Radio 5) and constant live appearances.
Fiercely independent and driven by Annette McLennan's insistent drumming and husband Rob's deep, growling vocals, the band released three albums ("One Came Running" (1987), "Into The Valley" (1989) on Principal, and "Fifteen Seconds" (1991) on Clear Cut) and finally the "Fly By Night" compilation before calling it quits in September 1998 when their bassist emigrated to Scotland.

May 30, 2019
Saw them many times live at various venues including their excellent gig on the steps of the Jo'burg Library when they launched their Into The Valley LP. Other memorable shows were @ Le Club, The Thunderdome and Bruma Flea Market. They were always tight live, with the fantastic Annette and Dave providing a powerful rhythm for Ian and Rob to accompany.

While the remix and reissue of 15 Seconds was unanticipated (in 2018) my favourite tracks of theirs remain unavailable on CD to date and one can only hope that after 30+ years they will see a digital reissue.

A couple of collections have been issued with the EMI 'Fly By Night' being the better of the two. It features the group's SABC session and some otherwise unavailable out-takes as highlights. The other release, 'The Present Has Passed' (on Fresh) features below average vinyl rips from OCR, IFTC & ITV but is to be recommended for the inclusion of so many otherwise unavailable songs.

Comments on their facebook page state that further digital reissues are coming. Links to the recent reisue of 15 Seconds Redux are also there and songs can be purchased/previewed on Bandcamp.
Reply  See 1 reply Notify me 1 Helpful