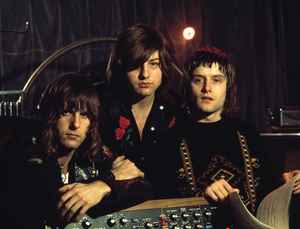 September 11, 2020
I am listening to the band for the first time today, and I tell you what, the vibe is real!
Reply  See 2 replies Notify me 2 Helpful

December 8, 2016
Another of those strange things that happen quite often-I was writing the small piece about ELP below-I did it spontaneously as I was listing a few things and hit the ELP 1st album page.
Anyway I signed off onto the news page-GREG LAKE DIES AT 69!How sad-another of the great trio goes.Mind you last time I saw Carl Palmer play-not long ago-he was still super fit and maybe he will live till 200!But like Keith,Greg Lake was a class act.And his work on the iconic 1st King Crimson album-never mind ELP-means his place as an important rocker is sealed.In The Court Of The Crimson KIng and the other great tracks on that album have become classics and it is mainly down to obviously great songwriting, but also to his vocals which were just perfect for those tracks-the perfect fit. Greg Lake-another rock great bites the dust.RIP.
Reply  See 1 reply Notify me Helpful

December 8, 2016
It has become fashionable in more recent years to slag off bands such as ELP-people who were never around at the time go on about excess etc.and it is a complete load of .....!
They were very much pioneers of a new kind of music-sure these might have been classical musicians many years before but at the time they fused into the energy of what was really the development of pop into real rock.And these 3 were brilliant musicians in their own right-tragic that Keith Emerson should end his life partly it seems thanks to the modern phenomenon of trolls-people who hide behind things and deliver only negative vibes....
I would just like to say that the first 4 albums are all top LPs and in the years 1970-74 these 3 were at the top of their game.I was lucky enough to see them many times from 1970 to 74 and will always remember my first real overseas gig at Amsterdam Oude Rai which started me off on the journey of catching as many of the great bands of the time in other parts of the world from where I lived.And people forget the great energy of ELP at this time-seeing them on stage was as exciting as anyone during this period-I loved many different types of music over the years and ELP in 1970-74 carried just as much passion/energy etc.as The Clash a few years later,AC/DC late 70s,Prince mid 80s and so on but also they were musically at a top level.And sure Keith Emerson chasing around the stage with an armadillo tank(Tarkus)and using his synth.as a musical weapon may seem dated now but it was well exciting and innovative at the time-and even now stick that 1st album on and The Barbarian sounds as hot now as it did 45 years ago whilst going to the end of Brain Salad I can say exactly the same-and so these early albums form a book of work-strong at the beginning,strong at the end,and full of great stuff inbetween.
It is always hard to look back many years and not think in music things are dated-they always will be to some extent as you have to realise that bands were doing it at that time and that is when they went together with that time.And ELP were no different to any other band in fitting with the time.Sure they lost their way a bit later on-tell me a band who hasn't but like all the other great bands of the time they put out 4,maybe 5 with Pictures,top albums in around 4 years and played a pretty unique brand of music by opting out of the statutory lead guitar and using the keyboard as the lead-of course Emerson,as a showman, was the Hendrix of the keyboards and as I remember they were near getting together as a supergroup just before ELP formed. Anyway I had a bit of time to kill and happened to land on this page-I started to watch one of the old videos and hence wrote this.Not a proper analysis of their work but just really an appreciation of some great times listening to the albums and moreso at the shows!
Emerson,Lake&Palmer a great group.