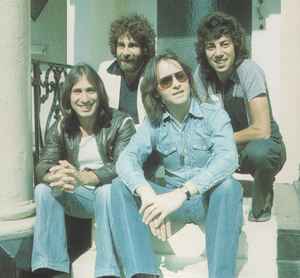 Profile:
Major 70s UK (founded in Stockport, Greater Manchester, England) pop/artrock band. The original line-up of Eric Stewart, Kevin Godley, Lol Creme and Graham Gouldman had composed together and been in the band Hotlegs (Gouldman only briefly) before forming 10cc in 1972 and signing with Jonathan King's UK Records after being turned down by Apple Records. The band's music is a blend of pop, artrock often drawing on other genres, on the debut album especially the 50s.

The original line-up lasted four years, reaching worldwide success in 1975 with the ballad "I'm not in love". In 1976 Godley and Creme left to form the more arty Godley & Creme while Stewart and Gouldman continued as 10cc. The first album by the new 10cc, the 1977 "Deceptive Bends" maintained the pop appeal of the group, but after 1978 hit "Dreadlock Holiday" from "Bloody Tourists" and Stewart's crisis following a car crash the band never returned to the major pop league.