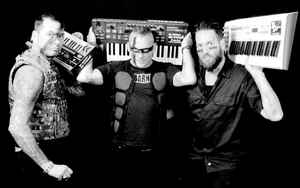 Profile:
It all started in the 80's when the world turned black and the music became dark. The first musical experiments were based on audio works on read lyrics. Later there were some activities as LJ and DJ in addition. There was a need for music. 2005 it got serious. The name FabrikC was born and the track „der zweite Tod“ (the second death) was placed in the DAC (german alternative charts). The same time the first cd album was composed „Farblos“ (colorless) and was send to some labels. FabrikC sinally found a home at ProNoize/DarkDimensions. Since then all releases were done there. Since then the stage shows were evolving and got support at the live drums by halfevil and later an additional live keyboard support in Ivy Chrome, now done by FRYZ. Throughout the time there were many live shows all over the world. Festivals like the SECRET GARDEN FESTIVAL in Hannover (Germany), the SUMMER DARKNESS in Utrecht (Netherlands), KINETIK FESTIVAL in Montreal (Canada) up to the WAVE GOTHIC TREFFEN in Leipzig (Germany). The soundscape around FabrikC is placed somewhere between stomping beats and grating and piping pads/sounds/noizes. Stimulation for many hours on the dancefloor.
Sites:
Facebook, Twitter, Bandcamp, SoundCloud, MySpace
Members:
Thorsten Berger
Variations:
Viewing All | FabrikC
Fabrik C