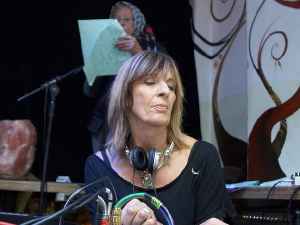 Real Name:
Monique Giraudy
Profile:
Miquette Giraudy is a keyboard player and vocalist, best known for her work in Gong and with her long-time partner Steve Hillage and was born on 9 February 1953, in Nice, France.

In the late 1960s Giraudy, under the name Monique Giraudy, became assistant to French film maker Jackie Raynal. She has script and assistant editing credits on the 1969 Barbet Schroeder film More, famously soundtracked by Pink Floyd. Getting in front of the camera she then appeared, under the name Marsiale Giraudy, in Jean-Pierre Prévost's 1971 film Jupiter, and, as Monique Giraudy, played the role of Monique in Schroeder's 1972 film La Vallée, anode soundtrack by Pink Floyd. Raynal herself appeared in Martial Raysse's 1972 film, Le grand départ and Monique Giraudy gets a full editing credit.

Gong
Already Hillage's girlfriend, Giraudy joined him in Gong as a vocalist in March 1974, replacing Diane Stewart-Bond, who had replaced Gilli Smyth the previous year. Smyth returned to Gong for part of 1974, with Giraudy coming back to the band in July. Hillage and Giraudy left the band together at the end of 1975.
Giraudy appears on the 1974 album You as "Bambaloni Yoni" (Wee voices and Chourousings (sic)), on one track of the studio album Shamal (1975) and four tracks of Gong Live Etc. (1977). She is also on the archival release, Live at Sherwood Forest 75 (2005). Together with Steve Hillage, she reunited with Gong for various shows from 2006 onwards and this line-up released a new album, 2032, in 2009.