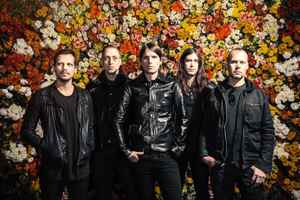 Profile:
Hardcore/punk band from Boston, Massachusetts formed in 1998. In 2003, the band faced a legal battle with a similarly named band from Philadelphia. Changed their name briefly to the initials "A.N." then to American Nothing for a brief period. After the other American Nightmare again threatened legal action, they changed their name to Give Up the Ghost (which was intended to be the name of their second album). The band broke up suddenly in June 2004, a day after announcing the cancellation of a European tour, issuing a statement which cited "health and personal reasons" for the split. Give Up the Ghost played two reunion shows in December 2011.
Sites:
Facebook, instagram.com
Aliases:
American Nothing, Give Up The Ghost
Members:
Alex Garcia-Rivera, Azy Relph, Brian Masek, Jarrod Alexander, Jesse Standhard, Jesse Van Diest, Jim Carroll (2), Josh Holden, Matt Woods, Tim Cossar, Wes Eisold, Zachary Wilson
Variations:
Viewing All | American Nightmare
The American Nights