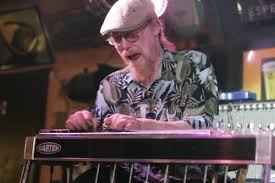 Profile:
San Antonio, Texas based guitarist and pedal steel guitarist who grew up in Dilley, Texas. Watson studied jazz at Southwest Guitar Academy and formed the power trio Life Support. He moved to New York in 1988, playing with jazz and avant garde artists and touring with the Holmes Brothers for four years. He returned to Texas in 2001.
He continued to play pedal steel after losing the fingers on his left hand in a 2001 fire where he suffered 3rd degree burns over 50 percent of his body. Wharton passed away in 2017.
Sites:
MySpace
Variations:
Viewing All | Gib Wharton
Wharton