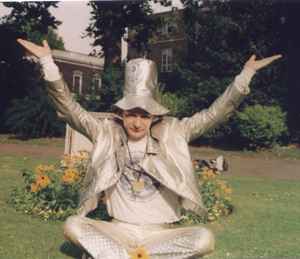 I really really the dig the recent (like last 12 yrs) MMM chillout mixes. OF course i also love the older more ambienty stuff. But the more recent mixes are so eclectic, and put together so well - and opened me up to music i wouldn't normally listen too. Please keep making them available!

September 13, 2010
One of the authentic rave and hardcore dissidents. Considered one of the first wandering DJ prophets of ambient music, he articulated a viewpoint that the original Detroit spirit has been destroyed by an avalanche of extremely worthless drug noise. He said how true Detroit techno has more in common with ambient than with hardcore. He described it as something with a very soft touch, radically beautiful. His delusion with the rave scene, where everyone were stuck in a cliche and expected instantaneous, short term pleasure, led him to define intelligent techno circa 1994 as a style contrary to senseless hardcore music. He claimed techno music became trite when hardcore took the creativity, the pureness and the crookedness out of acid house.
His contributions to the chill out/ambient scene are huge; he has been at it since 1989-1990, when he played at the Spacetime parties, held at Cable Street, in London's East End, organized by Jonah Sharp. These events were conceived in a manner for people to focus on conversating and socializing rather than dancing.
He then spun at the first Telepathic Fish event, an ambient tea party organized by the Open Mind collective, formed in summer of 1992, after they were disappointed by the philosophy of rave culture - harder and faster. The event took place in a four room house in southeast London, with Mixmaster Morris playing in the kitchen. The feedback was overwhelming, over five hundred people attended, with more crowd waiting in the street to get in.
All the way from the Even Furthur festival in Hixton, Wisconsin, organized by the mid west label Drop Bass Network, where he played for hours and hours, through to numerous gigs and festival appearances on a global scale, mr. Morris is one of those guys you cannot miss out on if you enjoy chilled out stuff.
As for his production, I'd recommed starting with his The Irresistible Force album from 1992., "Flying high". It's a unique excursion into nirvana, which starts with a sampled voice telling you how to engage in yoga excersises. The album is loaded with ambient sound effects, hypnotic loops, stereophonic tricks and drones. He even samples a comedian from the fifties, Joyce Grenfell, on Symphony In E. Vast improvements are made upon Brian Eno's take on the genre, since many sounds used are not natural, but processed and altered. To this day it remains one of the best albums recorded during the second wave of chill out music, started in the early nineties.
Shoulder to shoulder comes the classic "Dreamfish" series he did with Pete Namlook. The first installment has Hymn, my favorite ambient cut of all time, and one of the most mesmerizing, harmonic and mellow pieces ever recorded. The second Dreamfish album is much darker, relying less on melody and more on darker drones, profound soundscpaes which suck you in infinite blackness, alla some tracks from the Fires Of Ork series.
Do check at least those three albums out: "Flying high", and both of the Dreamfish albums. I am not that much of an ambient head, but those three rock - big time!
See 3 replies