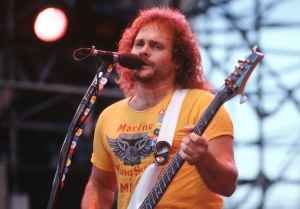 Real Name:
Michael Anthony Sobolewski
Profile:
Born 1954, Chicago. Bass player for Van Halen 1974-2006. On September 8, 2006, Eddie Van Halen announced that his son Wolfgang would be Van Halen's official bass player. Later, he revealed that he had been actually kicked out from the band since before because he joined in the live shows by Sammy and Dave in 2002 without the permission of Van Halen brothers, which made them angry.