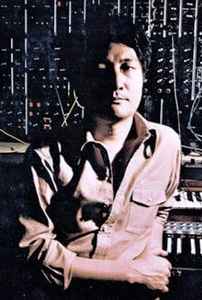 Real Name:
Isao Tomita (冨田勲 - Tomita Isao)
Profile:
Japanese composer, arranger and synthesizer player. Born in Tokyo in April 22, 1932. Died May 5, 2016, Tokyo, Japan.
He wrote the theme music used by the Japanese gymnastics team in the 1956 Olympics. He has written the background music for "The Life Of The Flower (1960), "The Heaven And The Earth" (1969), "The new Tale Of Heike" (1972) and "Kaishu Katsu" (1974). In 1973 Tomita established "Plasma Music".
On July 30, 1980 it was announced that Tomita was to be the first president of Japan Records.
Sites:
isaotomita.net, Wikipedia, imdb.com
Aliases:
Electric Samurai
Variations:
Viewing All | Tomita
I. Tomita, Isao, Isao Tomita, Isao Tomita & The Plasma Symphony Orchestra, Osao Tomita, Исао Томита, 冨 田勲, 冨田 勲, 冨田 勲, 冨田勲, 富田 勲, 富田勲

August 4, 2017
A greeting to the entire Tomita fan community.

My name is Edgar and I am from Mexico City. I write this message to request any help in the search of the name, album or any other information regarding an ultra rare musical work of Isao Tomita that I have searched without success for about 20 years.

If there were any interested in listening to the musical work and would like to help me know something about it, please answer this message and I will contact you soon.

Thank you all and rest in peace the great Tomita.
Reply  See 1 reply Notify me 1 Helpful

May 8, 2016
Its now been confirmed that Tomita passed away on May 5th. Terrible news. A big pioneer of electronic music has left us. RIP x
Reply Notify me 5 Helpful

The greatest electronic master of all time. The period of 1974-1981 is the most recommended: grandioso, unique, versatile, exceptionally charactheristic. Collectors watch out: I have many of his early releases which is not yet credited here on Discogs! The following stuff waits to be installed yet:

In my opinion, Tomita is the Moog pioneer, not Walter/Wendy Carlos. Carlos maybe more popular, but I think Tomita gave his recordings a more human feeling with a touch of humour. His warm string sounds are far better than Carlos' plinky staccato pulses.
If you're going to buy any of his work, I would start with Pictures At An Exhibtion, one of his best albums and buy Different Dimensions, a brilliant compliation spanning his career from Snowflakes Are Dancing up to Dawn Chorus.

March 16, 2003
Here is the right place to put a short biography of this great musician which is taken from the back of his awesome LP "The Newest Sound Of Debussy":

Isao Tomita was born in Tokyo in 1932. He studied art history at Keio University in Tokyo and pursued his interest in music and electronics with private teachers. While still a student he submitted a composition called "Wind Mills" to the Japan Federation of Choral Organizations to be used by contestants in a choral competition, and it was accepted. This led to requests for other compositions. He wrote the theme music used by the Japanese gymnastics team in the 1956 Olympics and then turned to films and television, particularly the latter. He has written the background music for such year-long NHK series as "The Life Of The Flower" (1960), "The Heaven And The Earth" (1969), "The New Tale Of Heike" (1972) and "Kaishu Katsu" (1974), and for his contribution to the industry Tomita was awarded the prestigious Television Grand Prix for 1973. He has also composed music for TV cartoon projects, including "The KIng Of The Jungle", which was shown on NBC under the title "White Lion"; this music was later incorporated into a tone poem, which was performed by the Japan Philharmonic. For Expo '70 he provided the music for the Toshiba hall, and he has been commissioned to compose the music for the Japanese government hall at the 1975 Okinawa Marine Expo. In 1973 Tomita established Plasma Music, which is dedicated to the creation of music by electronic means. Other members of the group include Kinji Kitashoji, who specializes in rock music, and Mitsuo Miyamoto, who specializes in mood music. Among the projects being planned are a piano-synthesizer concerto; "The Prince Of Stars", an original piece being composed by Tomita as a fantasy based on a synthesizer, and "Orchestral Prayer", for the Ohara Sanzenin Temple in Kyoto, which would utilize traditional Japaniese instruments coupled with sythesizers.
Reply Notify me 2 Helpful

August 31, 2002
One of the pioneers of electronic music. Most of his recordings are electronic interpretations of music by classical composers. He was originally inspired by Switched-On-Bach creator Walter Carlos, and produced his first album in 1974, Snowflakes are Dancing, featuring music by Claude Debussy.

His album notes typically included impressive equipment lists, including the massive Roland System 700 synthesizer, and numerous Moog modular synthesizer systems such as the IIIp and System 35.

Tomita is still active to this day, producing mainly classical music for events, films, and TV. His spectacular 'Sound Cloud' performances, where he is usually supsended in a pyramid above the audience, have been performed many times over the years around the world and feature music from all his past releases.

As an intersting aside, for those of you that grew up in the 60's and 70's, Tomita was also the composer of the background music for the classic anime TV series 'Kimba the White Lion'.
Reply  See 1 reply Notify me 3 Helpful