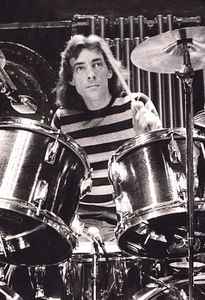 Real Name:
Neil Ellwood Peart
Profile:
Neil Peart (Born: 12th September 1952 - Died: 7th January 2020) was the drummer and primary lyricist for the progressive rock band Rush. He was known for his complicated, extremely technical drumming containing odd time signatures and complex arrangements. Peart joined the band in the summer of 1974 following previous drummer John Rutsey's departure and has been a member ever since. He has received many awards for his performances with Rush and was widely regarded for his technical proficiency and stamina. In terms of influence, he is considered one of the most popular and important drummers in history.
Sites:
neilpeart.net, MySpace, hemispheres.pl, imdb.com
In Groups:
Rush
Variations:
Viewing All | Neil Peart
N. Peart, N.Peart, Neal Peart, Neal Pert, Neil Ellwood Peart, Neil Elwood Peart, Pearl, Peart, Peart, Neil Elwood, Peazt, Pert, ニールパート, 二ール・パート

October 6, 2020
Thinking about Neil since Eddie passed today. Both Rush and VH were in my top 5 faves back in the 80's. Even though Neil retired, I still miss Rush and his drumming. Eddie hasn't done anything either, but now we know why.
Little by little, our rock heroes are dying, and one day too, I shall pass along with them.

Probably the most influential drummer of our time. He certainly recruited more bedroom-drummers than any out there, including me. I played drums in my teenage years, and i used to air-drum to Neal so many times. He was a true composer on the drums and rarely moved the notes from his songs every live performance. That is why his drumming compositions was so memorable. I still know Tom Sawyer and YYZ by heart.
Truly shocking to wake up today to read he was gone. Rest in peace hero.

January 10, 2020
Rest in peace, awesome drummer.
Moving Pictures is the first Rush album I bought and I recall I was BLOWN AWAY by what they did in YYZ.