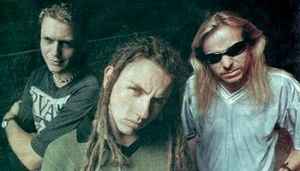 Profile:
South Africa's Just Jinger (pronounced "ginger") led by singer/songwriter/guitarist Art Matthews (real name: Ard Matthews) have gone through several line-up changes during their remarkable career after forming in Randburg in 1996, with drummer Brent Harris the only other remaining member.
Supporting acts like Def Leppard, Crash Test Dummies and U2, they achieved unheard-of success locally as a live act and in raw sales figures and decided to relocate to London in 2000 after releasing three albums and an EP.

A greatest-hits album was released in 2001 as the band tried their luck stateside for a while before returning to SA in 2004.

Due to irritating questions about the origins and meaning of their name and in order to make it sound more palatable to Americans, the band officially renamed itself to Just Jinjer in 2006. The pronounciation remains intact.
Sites:
justjinger.co.za, justjinjer.com
Members:
Art Matthews (4), Vernie Scholtz
Variations:
Viewing All | Just Jinger
Just Jinjer