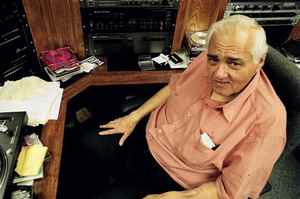 Real Name:
Ron Murphy
Profile:
March 3, 1948 - January 12, 2008
Record cutter, mastering engineer, and record producer at Sound Enterprises (formerly National Sound Corporation/see NSC Records page) in Detroit. Ron Murphy engineered for the first time around May 1966 for title "We Go To Pieces" a 45 single on Forest Hairston's Viney records label. He manned the classic reverb and echo units during Isaac Hayes' recording of “Walk On By” in 1971 at United Sound. In 1989 Steve Martel and Ron Murphy decided to open a store specializing in old phonograph records, situated at 17610 W. Warren in Detroit, Michigan. They named the business National Sound Corporation. Murphy came to the attention of the techno pioneers in the 1980s when the likes of Derrick May and Juan Atkins stumbled upon that westside cutting plant. Murphy owned a vintage cutting lathe from the 1930s and agreed to master and cut the metal prototype records. He pioneered pressing lock-grooves on records and invented NSC-X2 Groove Technology, he also encouraged artists and producers to make their end product unique, by including etchings written onto the records or enabling records to play outwards. He was also helpful in fixing young artist recordings that came out-of-phase, poorly-segued, or badly recorded but for all sort of release produced a warm, full and genuine sound. Ron Murphy was also known as "Motown Murphy", as he had one of the largest Motown records collection and an extensive knowledge of the Detroit musical history. Ron Murphy spanned two great moments of Detroit music history: Motown and Detroit Techno. He cut masters for many of Techno's innovators using his Scully lathe (which now resides in Mike Banks' Submerge building in Detroit).
Sites:
soulfuldetroit.com, hollandtunneldive.blogspot.com
Variations:
Viewing All | Ron Murphy
R. Murphy, Ron, Ron Murphy (R.I.P.), The Great Ron Murphy

August 3, 2016
I cycled to beyond the Iron Curtain and dedicated it to Ron Murphy back in 2009 shortly after his death... you gotta respect one of the pillars.

Nice tributes are being posted on SoulfulDetroit.COM about this Detroit legend who spanned the two pinnacles of Detroit music, sixties soul and techno. See posts and pictures on SoulfulDetroit forum where he was a regular poster. You can view these on the forum on Soulful Detroit under the thread "Ron Murphy RIP".

He also authored a great webisode on the famous 60's era Fortune Records of which he was considered ~the~ authority in the Detroit soul community. Follow the Fortune records links off the home page of SoulfulDetroit.

September 6, 2007
Ron Murphy is probably one of the most instrumental figures in the history Detroit electronic music. All you have to do is take a good look in your record collection and look for the little NSC logo on the runout groove on the inside of the record. Ron has shaped the sound of Detroit Techno more than just about anybody. There were allot of records back in the beginning that were brought in by people that knew next to nothing about production or mixing down properly and Ron has saved the sound of those records and many of them have went down in history as some of the finest examples of techno ever made. Ron has been one of the biggest opponents of overcompression in the industry as people have rushed to bring techno music into the rediculous loudness war that the rest of the record industry is engaged in currently. His mastering is both dynamic and warm and has been praised for it's definition in the low end. A kick drum on an NSC mastered record is a beautiful thing to behold. He's a real living legend in this industry yet he remains humble and is still one of the most interesting figures in this industry that i have ever talked to. A true classic character.