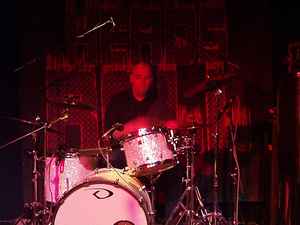 Profile:
Birtwistle started off from 1985-1989 playing drums in Laugh, which turned into Intastella through the late '90s, with the addition of vocalist Stella Grundy. He was also a member of the last edition of The Bodines, in 1989, playing on their final single, "Decide". He played drums for The Fall from November 2000 to November 2001, and from July 2004 until resigning from the band in the middle of the June 2006 US tour.
In Groups:
Bad Man Wagon, Intastella, Laugh, The Bodines, The Fall
Variations:
Viewing All | Spencer Birtwistle
Birtwhistle, Birtwistle, S. Birtwistle, S.Bertwistle, Spencer, Spencer Birtwhistle, Spencer Britwistle