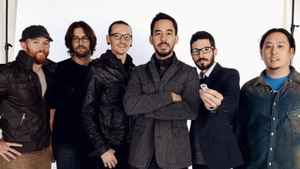 Linkin Park are one of the most popular bands of the so called "nü-metal" movement, along with Limp Bizkit, Korn and several others. Their sound is a wide range of influences, including metal, alternate rock, hip-hop, electronica and industrial. Linkin Park's debut album "Hybrid Theory" was a multi-platinum smash worldwide, selling over 30 million copies, 12 million of them in the US alone. Reanimation is the correspondent remix album.

Formed as Xero (5) in the winter of 1995/96, the band was renamed to Hybrid Theory in 1999. They were signed as a developing artist to Warner Bros. Records in late 1999, but the label advised them to change their name to avoid confusion with Hybrid, a popular House music group.

Looking for a new name, Hybrid Theory briefly considered "Lotus Foundation Project" and "Plear", before settling on "Linkin Park" in May 2000. This name was suggested by Chester Bennington after seeing a street sign for the park named "Lincoln Park" in Los Angeles. The spelling was changed to "Linkin Park" to acquire the internet domain "linkinpark.com".

February 20, 2022
Anyone trying to sell the commerical versions of Iridescent and Burning in the Skies for less than $100 and $200

I really loved the first 2-3 albums of Linkin Park. But already with MTM it was noticeable that they went more commercial. ATS was still interesting since it was experimental and unusual, something you wouldn't consider commercial but I guess it just didn't live up to their previous works. And Living Things was just a sad follow up at which point I completely lost interest in the band. The Hunting Party was not my taste even though I appreciate the try to sound more "oldschool". I often listen to their first 2-4 albums but that's it. Reanimation was also kinda good and that while I am not that much into remix albums.

I decided to edit this review since I personally think it was written too disrespectful and not reflecting everything. Beside of that I also mourn the death of Chester Bennington ever since. Truly a loss. I just don't think its right in the light of the happenings to rant over the band no matter whether I can't do much with their modern material anymore. For me their early works will always stay in my heart with good memories. We also got the 20th anniversary of Hybrid Theory.