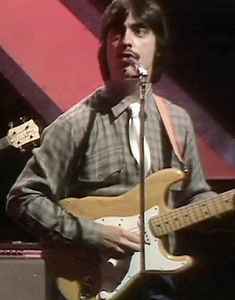 Profile:
NOTE: two releases by Björk and one by The Cure have been incorrectly given technical credits under Mark Warner. They should be moved to Mark Warner (3).

Mark was one of the founding members, guitarist and vocalist of Quantum Jump. He played the astounding ﻿cult favorite guitar solo ﻿on “No American Starship” while with the band. Their platinum selling single, ﻿“﻿The Lone Range﻿r”﻿ reached #3 in the UK selling over 500,000 copies which led to a performance on the long running BBC "Top OF The Pops" TV show. He left and was replaced by other musicians for their second LP "Barracuda".

After leaving QJ and joining Cat Stevens on the "Majikat Tour", Mark moved to Los Angeles. He ﻿then toured with﻿ Neil Sedaka for several years before being hired to compose the music for a “7-Up” national sales meeting. This was the catalyst for his composing career. Since then, he has written music for numerous corporate shows, television series and theme park attractions. He performed on the Johnny Carson Show and joined a local band called the Proffesionals with Phil Carter, and in City Dump with Gilly Betson on drums and Mckinley (?) Devilbiss on bass.