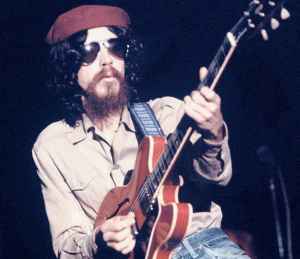 Real Name:
Raul Santos Seixas
Profile:
Brazilian singer and songwriter, born June 28, 1945 Salvador, Northeast Brazil, died August 21, 1989.
Raul Seixas Santos released his first album when he was known by the nickname of Raulzito album Raulzito E Os Panteras in 1967. Raul Seixas was a famous Brazilian singer and composer, often considered one of the pioneers of Brazilian rock. He was also music producer of CBS during their stay in Rio de Janeiro, and is sometimes called "The Father Brazilian Rock" and "Mad Beauty".
His musical work is composed of 21 albums released in his 26-year career and his musical style is traditionally classified as rock and ballad, and indeed managed to unite both genders in songs like "Let Me Sing, Let Me Sing".
Her debut album, Raulzito E Os Panteras (1967), was produced when he was part of the group " Os Panteras " but only gained critical notoriety and public with the songs of Krig-Ha Bandolo! (1973), as "Ouro De Tolo," "Mosca Na Sopa," "Metamorfose Ambulante" .Raul Seixas acquired a musical style that credited to "contester and mystical", and this is due to the ideals that vindicated, as Alternative society presented in Gita (1974), influenced by figures such as Aleister Crowley. Raul was interested in philosophy (especially metaphysics and ontology), psychology, history, literature and Latin, and some of these beliefs currents were much enjoyed in his work, which had a good or curiosity reception on that account. He managed to enjoy a relatively high audience during his lifetime, and even in the 80s continued to produce albums that sold well, as Uah-Bap-Lu-Bap-Lah-Béin-Bum! (1987) and A Panela Do Diabo (1989), the latter in partnership with Marcelo Nova , and his musical work has continuously increased in size, as his records (mostly posthumous albums) continue to be sold, making it one of the country rock symbol and one of the most revered artists and beloved among fans in the last forty years.
In October 2008, Rolling Stone Brazil promoted the List of the Hundred Greatest Artists Music Brazilian, whose results put Raul Seixas ranks the 19th position, heading names like Milton Nascimento, Maria Bethania, Heitor Villa-Lobos and others. In the previous year, the same magazine promoted the list of the hundred biggest discs of Brazilian Music, where his "Krig-Ha" 1973 reached the 12th position, demonstrating that the musical force of Raul Seixas still considered to be important today day.
The 50 appearances for Brazil resulted in what would be the last album released in life by Raul Seixas. The album was titled The Devil's Pan, which was released by Warner Music Brasil on August 22, 1989.
At 7:00 'Monday morning, August 21, 1989, the maid of Raul Seixas, Dalva Borges, as usual, entered the room where he slept Raul to open the window and watching, saw the sheet covering him to the height of chest. So, he went outside to start the day's tasks. But Raul would not wake up and that was unusual because
often enough one noise and he already lifted. Concerned, Dalva decided to see him again and found him in the same way, and without reaction. Of that way she thought he might be dead. Startled, he rubbed his phone and called friends Marcelo Nova and Jerry Adriani. You could not find them.
then tried the partner number José Roberto Romeira Abraham.
He then asked Dalva placed a mirror next to Raul's nostrils to see if he was still breathing.
She went and came back saying they would not leave steam nose and he gave no sign of life.
With the doctor Luciano Stancka and Marcelo Nova, Abraham went to Raul's flat and there came the doctor found that he was dead already had a few hours and gave the death certificate. The news was held until the afternoon to not cause confusion in the building. Raul Seixas died at 44 years of acute pancreatitis caused by excessive drinking.
The LP A Panela Do Diabo sold 150,000 copies, earning Raul a posthumous gold record, delivered to your family and also to Marcelo Nova, thus becoming one of the most successful of his career discs .
Raul was laid for the rest of the day at the Anhembi Convention.
The next day his body was taken by air to Salvador and buried at 17 pm in the Garden Cemetery Saudade.
Cause of Death: Acute Pancreatitis.
Burial: Garden Cemetery Saudade, Salvador, Bahia.
Rua Campinas Brotas, 754 - Brotas, Salvador - BA.
Sites:
MySpace
Aliases:
Raulzito, Rock Generation
In Groups:
Raulzito E Os Panteras, Sociedade Da Grã-Ordem Kavernista
Variations:
Viewing All | Raul Seixas
R. Seixas, Raul, Raul Santos Seixas, Raul Seixa, Raul Sexas, Raulzito, Raulzito Seixas, Raúl Seixas, Seixas