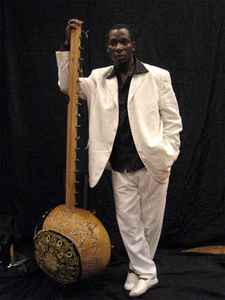 Profile:
Djeli Moussa Diawara (also known as Jali Musa Jawara) is born in a family of griots. His father was a balafon player, and his mother a singer. His half-brother, they share the same mother, is Mory Kanté. He then became a « jali » or « djeli », a mandingo word for griot. He learned to play the balafon, the kora and the guitar.

At 18, he went to Abidjan, Côte d'Ivoire where he played with his half-brother who was leading the legendary Rail Band. Starting his solo career, he worked with Djenne Doumbia, a great singer who later joined Salif Keita's group.

In 1983, he recorded his first LP, "Yasimika" which was considered to be a great piece of African music. Then, he left for Paris.

He released his "Flamenkora" album in 1998, offering a rich blend of styles, from his Mandingo roots to Flamenco.

He then founded Kora Jazz Trio, with Abdoulaye Diabaté (piano) and Moussa Cissoko (drums). He composed most of the tracks on which he sings. He also played the Kora and sometimes the guitar, on the three albums they released (Part I, II & III).

Singer and musician, Djeli Moussa developed a very intimate relationship with his 32-stringed Kora, which is unique and was adapted at his request from the 21-stringed traditional Kora. He was able to adapt to many different rhythms from traditional Mandingo to Salsa, Flamenco, Blues and Jazz.