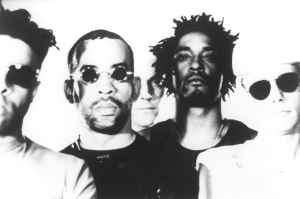 First under the moniker Fats Comet and then Tackhead, they recorded experimental 12" singles using a sampler as a real instrument, mixing dub, funk, and industrial music. In 1989, vocalist Bernard Fowler joined the band, taking it into a less underground direction.

September 15, 2018
I saw Tackhead twice in the late '80's when they played in Manchester. Both great gigs.
See 2 replies

My personal holy grail is a copy of the promo video for 1990's Class Rock off of Strange Things. I asked Skip, Bernard and Doug about it when they did a radio interview in Connecticut. They hadn't seen it in years and Skip said he wore a real expensive pair of glasses in it and never saw them again. The clip seen on Youtube is a live version. Anybody with any other Tackhead material (radio interviews, etc) Please contact me!

June 3, 2015
Additionally, Bernard Fowler was a background singer for The Rolling Stones. It is through him that Doug Wimbish became The Stones' live bass player after Bill Wyman left that band.
See 1 reply

April 15, 2015
mossadon pretty much nails it, except that Bernard Fowler didn't really come into the story until well after Tackhead was established. They were playing as a recording and live unit as Tackhead already, but Fowler joined the band for their major label backed album 'Friendly As A Hand Grenade'. They also played as a version of the Maffia, Mark Stewart's backing band, and still do when they get the chance. Several of the releases under Keith le Blanc's name, eg. 'Major Malfunction' are actually Tackhead, as are many other On-U projects, such as Strange Parcels.

A band containing musicians who are considered some of the best in their individual fields, TACK>HEAD are a rare thing in modern music ... Unique !
SKIP McDONALD (Guitar),DOUG WIMBISH (Bass) and KEITH leBLANC (Drums) were basically the house band for non other than SUGARHILL RECORDS. They layed down the backing for some of Rap musics timeless classics, including Grandmaster Flash & The Furious Five's "The Message" (note, GMF had NOTHING to do with this record!). After hookin up with English engineering genius ADRIAN SHERWOOD they started a project called FATS COMET and commenced delivering industrial electro masterpieces full of cut up vocal samples over progressive,illuminating beats together with dirty street licks and sometimes joined by DJ CHEESE to cut and scratch to the rhythm. These records crossed baundries, being played at New Wave clubs, Student Nights and for breakers and poppers at Rap clubs.After 5 releases under that monicer they were joined by NYC Peach Boys vocalist BERNARD FOWLER (The singing preacher at the end of the movie BEAT STREET) and seamlessly morphed into TACK>HEAD.
With the addition of real lyrics and with further exploration into other 'styles' of music which they made their own, TACK>HEAD developed a style and delivery unique in contempary music. Niether Electro or Rock, New Wave or Pop they are all this and more. Always having a conscious head for the political happenings of the times and never afraid to say something about it (They contributed to the SUN CITY project album ) but countering that with a healthy dose of fun. They are truly unacknowledged in general music for their groundbreaking material and the influence they've had.

April 8, 2004
Borrowing from virtually all musical genres going (ska, rock/metal, electonica, dub, hip-hop, etc, etc), <i>TACK>>HEAD</i> are one of those outfits that really defy any neat classification. Their unique soundtrack is inter-laced with voice samples (e.g. Margaret Thatcher) and an underlying and overriding alternative political stance.