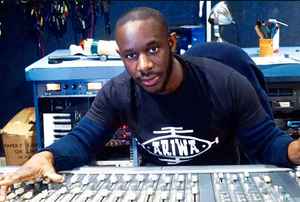 An apprentice of Mad Professor in Ariwa Studios, hence the name Joe Ariwa!!! His first touch with music was as a two year old when he plugged in a guitar amp into his father mixing desk. Being privileged to be the son of a renowned artist/ technician Joe has learned most of his skills at the knee of an excellent teacher.

Growing up in and around the Ariwa studio was very influential to Joe as he was given the opportunity to engineer & learn the music business whenever the chance had arisen whether after school, on the weekends or in school holidays. At the end of his secondary education as eager as Joe was to jump straight in to work with his father he studied & passed various music technology courses to get the academic side of the business.

When Joe had completed his education, he continued at Ariwa Studios full time working under various job titles whether in the studio or on the admin side of things.

Having unlimited access to the Ariwa archives, Joe had played & researched vintage multi-track tapes that Mad Professor would have recorded when Joe was a mere toddler. Discovering some real good quality material Joe was amazed that a lot of the music never got the exposure it deserved. He then began transferring these exclusive 24 multi-track tapes to a portable Alesis 8track for the Mad Professor live Dubshow. This new but old material helped to develop Mad Professors Dubshow nicely leading to fans recording the shows to upload on You-tube, receiving so much good feedback some songs were eventually released or re-released on 7 inch vinyl selling well considering the current musical climate. Examples are Rebel on the roots corner-Tippa Irie & Ackle & bother-Papa Levi.

By 2006 Joe had became Mad Professor’s right hand man on & off the stage assisting, selecting songs, being the opening act & developing into a skilful Mic man, toasting & entertaining the crown.

At this time Joe was also experimenting with his own production & had released a few albums of his own as well as a joint dub series with Mad Professor.
Sites:
ariwa.com
Aliases:
Joseph Fraser
Variations:
Viewing All | Joe Ariwa
Joe, Papa Joe Stand Out Selector