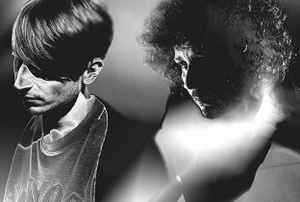 Profile:
Originally a trio based in Yeovil, UK.

Lionel left before being involved in any Psychonauts singles, EPs and albums, except for involvement in their live DJ sets and the two James Lavelle credited mixes on the Tribal Gathering '96 & Cream Live Two releases, as well as their outstanding BBC Radio 1 Essential Mix, 15th Dec 1996 (never commercially released).

May 19, 2008
This pair together as DJ's absolutely rock. They are quite simply the most underrated DJ duo out there. These days they peddle electro but when they don the downtempo/hip hop/broken beat/drum n bass hat, these guys are unstoppable.

They have so much skill on the turntables. If you want further proof of this, heads need to seriously check their groundbreaking Essential Mix for BBC Radio 1 from 15th December 1996. 12 years on and this is arguably the best ever Essential Mix. Also, the Cream CD they mixed whereby, James Lavelle took the credit and put his name on it. There's no way James Lavelle can mix like these two, and some of the mixes were showcased on the Essential Mix they did. Seriously, check them out.
Reply Notify me 12 Helpful