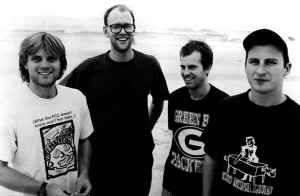 Profile:
Archers of Loaf is an American rock band from North Carolina formed in 1991. The group disbanded in 1998 and Eric Bachmann went on to Crooked Fingers, while Matt Gentling supported Superchunk (also from North Carolina) during one of their tours among other things. The group reformed in 2011 and played a number of concerts and made a television appearance. In a 2018 interview with Eric Bachmann, he said all of the members of Archers of Loaf are on board with the idea of reforming and making a new record, saying "Oh yeah, everybody wants to do it — I just have to write the songs."
Sites:
Wikipedia
Members:
Eric Bachmann, Eric Johnson (10), Mark Price (2), Matt Gentling
Variations:
Viewing All | Archers Of Loaf
Archers Of Loaf!