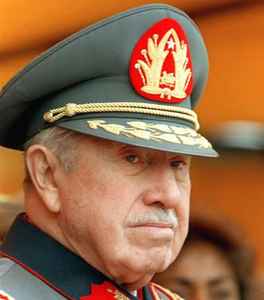 Real Name:
Augusto José Ramón Pinochet Ugarte
Profile:
Augusto Pinochet (born 25 November 1915, Valparaíso, Chile – died 10 December 2006, Santiago, Chile) was a Chilean general, politician and the military ruler of Chile between 1973 and 1990; he remained the Commander-in-Chief of the Chilean Army until 1998. He was also president of the Government Junta of Chile between 1973 and 1981. His rule of Chile was a dictatorship.
Sites:
Wikipedia